“What are these people racing?” I asked excitedly. My husband and I were driving up the foggy Duluth expressway for a weekend rock climbing trip. I pressed my face into the passenger seat window to get a better look and start counting the bikers. There were dozens, maybe hundreds. There were all types of people, too: old, young, heavyset, svelte. I had this weird urge in my gut. I wanted to be biking too.

I’m a runner, not a gear head. I’ve never even owned my own bike, even when I lived in Madison (a city where you bike everywhere). I’ve always had hand-me-down junkers to transport me from work to campus to the terrace. 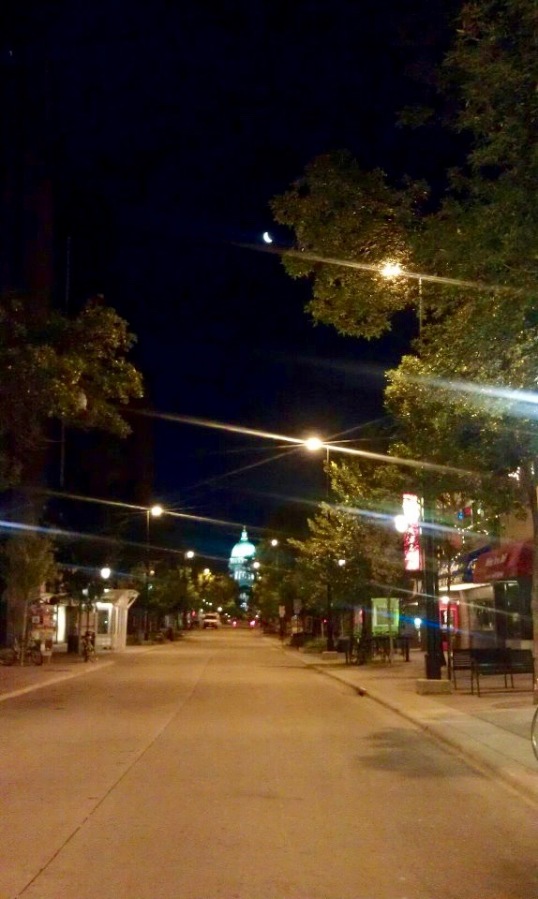 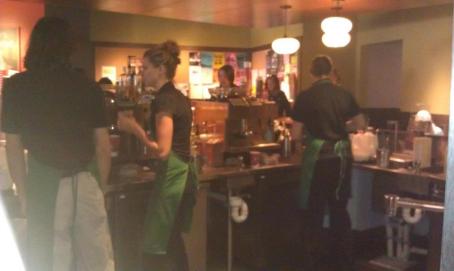 One summer later, I was struggling through an aggravating ultrarunning burnout. I had started my season in January and buried myself in races. Now it was July, and I found myself too tired and too slow for double-digit mileage. As runners, we talking about cross-training a lot (usually while we are running). Everyone nods heartily in agreement and says things like oh it’s SO important and everyone should do it twice a week …and we run on.

I decided to buy a bike.

I began researching and reading, getting familiar with brands and styles, but I realized that getting into biking is the same as trying anything that’s new: real knowledge comes with experience and time. Everyone seemed to be an expert and no one shared the same opinion. So, I bought  a used one about the right size for about the right price. It was a tri bike. I felt the same excitement build in my stomach.

My beautiful bike sat in the garage. Day after day, my husband asked me if I wanted to go for a ride. Day after day, I said no. I was chickening out big time. The bike weighed as much as a grapefruit, had speedplay clip- in pedals, had weird handlebars that encourage tipping over; the balloon in my stomach popped. I bought shoes and a helmet and tried to go down the road and back once. I put it back in the garage.

Two ladies I run roads with, who I very much respect, invited me to bike with them one evening after work. I hadn’t run for a week and my brain was begging for exercise, so I agreed.

They promised an easy fourteen miles – that sounded palpable. Nineteen miles (and no crashes) later, we circled back to the beach parking lot and I felt the feeling ballooning up again. I had a blast, and my legs weren’t screaming.

I biked a handful more times before winter and stored the bike downstairs with the summer stuff. I forgot all about it and started running again.

This summer, I decided to get the bike out. As extra motivation, I even signed up for my first triathlon. I mean, I definitely spelled it with an extra “o” but it seemed like a good idea.

My Key Mistake: The Association Fallacy

After minimal googling and zero input from any seasoned triathletes, I registered for the Superiorman 70.3 (half Ironman) – the race I saw on the expressway two years ago. The course consists of: jumping off a ship in Lake Superior to complete a 1.2 mile swim, riding 56 miles out to Two Harbors and back, and a 13.1 mile run around the Lakewalk in Canal Park. Cake.

**Note the lack of runner in their poster. Biking is the “meat and potatoes” of a tri, as my friend Sherry says.

I started training late spring by riding my bike once a week and thinking about swimming. Eventually, I bought a used wetsuit and carried it around in my car equipped with goggles and my best intentions. Cross-training is hard.

As I began incorporating the bike and the wetsuit in my weekly routine, I was reminded how intensely uncomfortable it is to dig in to a new thing. I’m always bullying people out of their comfort zones and touting risk and change. Superiorman training was a hefty dose of my own opinions.

Eventually June arrived and I had three months until race day. I needed to OWS, or open water swim as triathletes say (took me a few times to figure that one out). I dragged myself to the water’s edge and sized up the weeds poking out of the water. I’m not afraid of them, but weeds are gross, even in a wetsuit. These weeds were so tall they brushed your face and slid between your toes as you front clawed through them.

The first time I swam, I saw a dead fish and some golf balls on the bottom. I knew I needed to swim deeper because the shallow stuff was freaking me out. I tried swimming in the mine pits – which are several hundred feet deep, freezing cold, dark, and scary as hell.

The conditions were as close to Lake Superior as I could find (minus the waves). Every time I put my head down I expected the flashing jaws of a pike or a dead body to be in my face. I didn’t know the distance, so I timed myself to swim for a half an hour, then forty, then forty-five minutes without stopping.

I did it. Then I did it again.

I became more active with our local multisport group and I met some real triathletes. They are fantastic people. Competent and full of advice, gear, tips, and encouragement. My tribe is on the trail. But, this new tribe was an awfully ambitious, generous people. I started doing things called brick workouts and looking forward to evening rides with them. I learned to look at and track data.

**I do need to confess that I still marginally hate the bike. It and I are not in sync, not yet. I finally feel like it’s an extension of me, not a strange machine, but something is still off between us.

As July came to a close, I started poking holes my training. Superiorman was two weeks away.

I was still running high mileage weeks. I did the other disciplines as I could, when I could, once or twice a week. Would it be enough? I doubted myself. Training around really talented athletes gave me cause to ask myself what I was doing. Triathletes seem like great bikers, not runners (especially long, slow distance runners).

I revisited my original intentions: to avoid the burnout. To explore new territory.

I decided to do a local sprint tri for a dress rehearsal. There all distances of triathlons: sprints, Oles, Olympic, and so on. It’s logistically amazing to me (those poor race directors). The Walker Tri is a 0.25 mile swim, 17 mile bike, 2.8 mile run. To be honest, it sounded pretty easy.

As we pulled in and unloaded my bike, I felt nervous. I didn’t know how to arrange my stuff on my mat (I didn’t even have a mat). I didn’t know that I should figure out which gear my bike was in and have my number on a race belt. Things like that. I felt like a nube.

The thing about triathlons that’s incredibly different than ultramarathons is the degree of competitiveness. Before I knew it, I was stampeding into the water. It was on.

The race: super short swim, I felt slow on my bike, and I shot through the run. My speedy splits surprised me (thanks to those weekly pre-dawn track workouts led by a hometown Kona Ironman competitor and fantastic person, Sara). My jaw dropped when I was awarded second place for my age group – not that there were dozens in my age group, but I felt bolstered by the achievement.

As I flipped the  calendar to August, I had one last week for “key sessions,” as Sara says, and then it was taper time.

I did compete in Superiorman this year.

To be continued in Part II: Escape From the Vista Fleet! 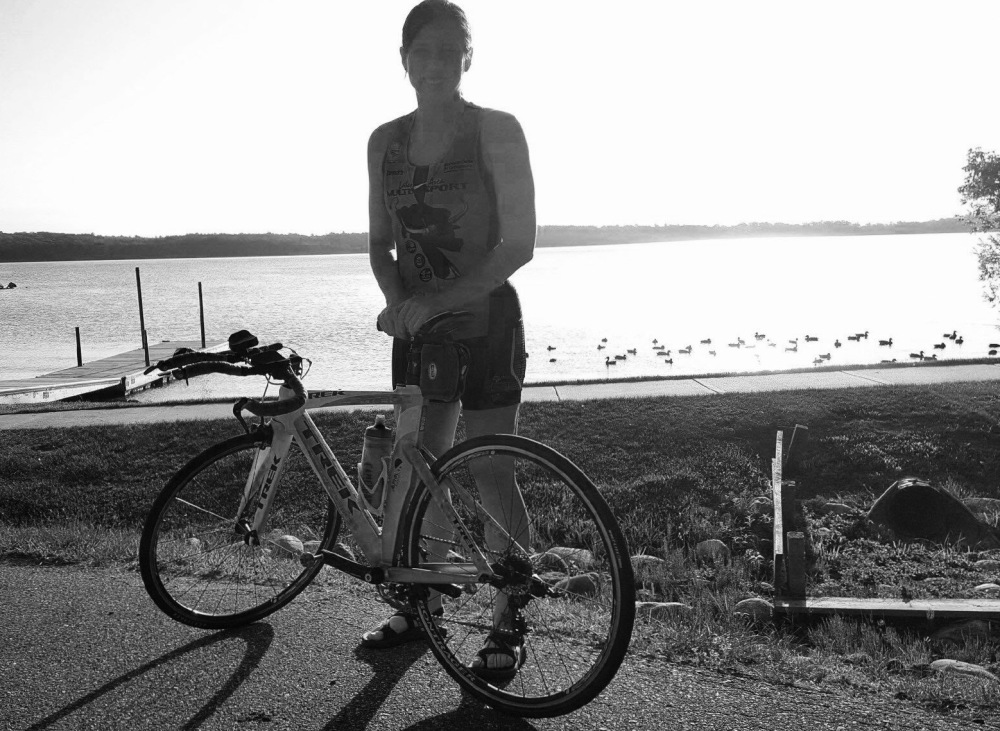