Just before twilight, we double-knotted our laces and switched on our headlamps.

Minnesota Octobers are rich with colorful afternoons and frosty mornings. This morning felt like a July night. It was 65 degrees and muggy.

Surf the Murph is a looped trail race through deciduous forest in south-central MN. I registered early, excited for a crisp 50 miler (fall running is the best running). I was excited to be past the humidity and mud from the summer and run dry – which means fast – horse trail.

85 of us gathered at the start, and I was lucky to share the company of many friends.The race director sent us off without ceremony and we were gone in seconds. The sky was thick and the leaves swished and crinkled around our ankles. It smelled good and decaying.

We settled into our paces without the usual jostle and bottleneck of trying to find yourself in the right position. I wasn’t sure how I was feeling. Even the night before, filling my pack and stuffing my drop bag, I wasn’t sure how I felt. My gut was missing the usual buzz and fervor of race day.

We chatted, shuffled – in the distance, the sky flickered orange every so often. The first time it happened, I thought someone was taking a picture up ahead.

Then is happened again and again. The earth rumbled. I had checked the weather ten times the day before and knew there was a chance of precipitation. “It’ll just mist,” my friend assured me lightheartedly. I hoped so. It had already rained through half my races this year. It had rained a ton this year in general. I braced myself for the blow.

The first five miles of the course are stocky hills, some quite steep. The skies cracked open before the first aid station (my friend, it wasn’t mist). In the next moment we were splashing through deep mud with our headlamps scattering light against all of the droplets. The sun was still an hour from rising.

It was not as cold or fearsome as it could have been in October; it was actually quite warm and surreal. Aside from my worries about inevitable chafing, I enjoyed it. Running in the rain in cleansing. Our shoes mashed water and mud and horse crap together into miles and miles of slog.

I biffed it hard leaving horse camp and scraped my arm, my leg, and my thigh on gravel covered with standing water. Blood was washing away from all three places, and it stung, but I knew it wasn’t too bad. We had more hills to slide up and slip down and stretches of open prairie to conquer.

I soon found myself in the company of a new friend, Lyndsi. We quickly realized our cadence and goals were similar (her goal was to finish and my goal was sub 12 hrs), and we settled into mutual stride. I found myself instantly at ease and grateful for such fortuitous company. We chatted and chugged along.

The severe thunderstorm backed off and the sun rose. We finished our first 17 mile loop. Trail conditions were garbage. Shortly into the second loop, the skies opened and dumped buckets of rain on us. Again. Nothing stayed the least bit dry, it rained that hard and that much. Sopping.

Lyndsi was ebullient; she was running her first 50 and she was full of spunk. I felt like I’d already paid my dues to the mud this summer, several times over, and here it was – demanding more. I was less enthused. She didn’t mind.

As a couple dozen miles ticked by, I was growing discouraged and soaking. I was sliding back half a step for every hard push upward on the hills. In the meadow, our feet sunk without momentum. Lyndsi asked me about ultra running, and what made an ultra runner. We spoke honestly about other struggles. I think it’d be a mistake to dismiss ultra runners from struggle – every one of us faces it and copes with it, on the trail and off.

I suggested that ultrarunning might have something to do with resilience. The skills we learn on the trail certainly help me handle my life on pavement. Resilience is tricky: it’s your capacity to recover quickly after something hard or difficult, but “recover” and “quickly” sound so easy. Many of the most important things in life are processes, neither quick to bounce back from nor easy to recover. Resilience is a lifelong skill. We kept paddling through the squelch and trying not to sink into the deep parts.

I did some research and it turns out that no studies have been done about the correlation between  endurance sports and resilience, although one Stanford PhD found that ultra runners may have “developed stoicism” from their many hours of training.

Developed stoicism. I’m a poet, so I love meanings. A stoic is: a person who can endure pain or hardship without showing their feelings or complaining. Also tricky – how stoic is too stoic? When is it healthy to show feelings? Even to complain?

During our second loop, I felt heavy with mud. I knew that I just needed to make it to the third loop to feel like I was getting a handle on the race, but I was tired of sliding down hills and panting with the humidity. I felt slow and cumbersome. I nearly stopped talking with the ebullient sunflower in front of me. Rarely do I feel like the less optimistic person. I was the less optimistic person.
We plodded on and I returned to my senses. It’s not unusual to have emotions thrust you up and stab you down in long distance races. I got stung by a bee and two of my fingers swelled up. It didn’t matter. We were 30 miles into the beast. 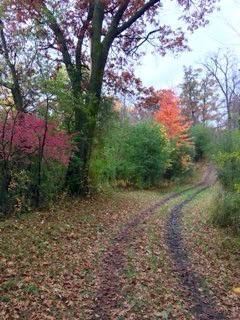 The second loop gave us insight into what we missed in the darkness.

As we closed on 33 miles, we came into the start/finish area and changed shoes. I had made a dumb mistake of wearing junk shoes since I suspected the trail conditions might be bad if the forecast was right (and it was). This backfired; they actually collected mud through their holes and filled my toes with sand and silt.

I was glad to switch into dry socks and light footwear. We refilled bottles and grabbed something to eat and set off on the the final loop. Neither of us cared deeply about the first 30 miles; we had been those distances many times over. This was the ultra part. This was the coup de grace.

Immediately departing the aid station, I felt relieved. It was time to do the heavy lifting. I was finally doing what I came to do. We kicked it into high gear (which really meant we kept the same pace as the previous loop, but we worked harder for it). 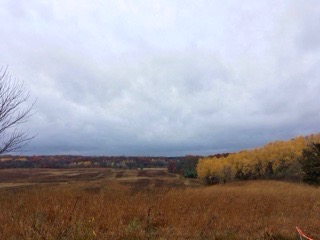 The trails drained and our spirits rose. Our talk became deeper, and also funnier. Lyndsi led courageously and when a low hit, I pulled up the reigns and marched us forward. We were making really good time and keeping our heads high. I soon realized that, even in that wretched muck, I was going to PR my 50 miler. I should’ve felt more emotion. I didn’t. I only felt drive. I was coming into the race from a stressful week. I needed those miles to help me strip the monkey from my back.

The third loop made more sense. We weren’t sliding as much, spinning our wheels anymore. We were progressing forward and proud of our pace. I allowed Lyndsi’s genuine spirit to boost me up; I  can only hope that I was able to boost her the same way. We stopped to stretch, we stopped at the aid stations, and still we were making excellent time. We changed our goal to 11 hours.

We were only eight miles from the finish. Halfway around the loop.

Then five. That’s just a loop in the Arb.

The last few miles are hilly, like the beginning, and we ran up most of them. Our conversation was sparse and encouraging; I kept glancing at my watch. We would be seconds under, or over. We both strained to go fast. I wasn’t willing to let the last ten hours go to waste.

We looked for the open red gate that means you’re less than a mile from the finish.

The final corner is uphill. We turned it and saw people. I felt comforted and proud. The work was done. Lyndsi sprinted ahead, overcome with the achievement and joy that running awards you. I kept running steady.

I kept running steady and finished a few seconds behind. Crossing that mat felt like fifty pounds off my shoulders. One mile for every pound of baggage on my mind, on my heart. I unclipped my pack and sat down with friends.

Running that far, that long, really affords you the opportunity for honest self-evaluation. You will question and measure your own fortitude. You will consider and evaluate your own mind. It’s a healthy dissection.

Running long is often what brings me back to what I need and what I know.

The things I value, both in myself and others.

Running that kind of race isn’t easy, even if seems like plenty of people do it. In fact, only  0.028% of Minnesotans will complete this kind of event (this map shows the percentage of each state). It’s demanding and sometimes painful. No one out there is winging it. No one out there is fooling anyone.

I had to practice my resilience in the mud. I need to practice my resilience in my daily. I need to ask myself when it is time to be stoic and when it is time to be emotive. Sometimes I think that boundary is more like a territorial dispute. I think there is a time for both. I was so proud of Lyndsi for her determination; she had tears of happiness at the end. I was proud of myself, too (even though when I finished, I barfed up half a pickle and was ready to go home). Maybe it’s ok to experience both days. Maybe that’s part of riding the surf.